Let’s look at a batter’s card and a pitcher’s card to make sure we know where our player ratings are located on each. Both cards have a year and team name at the top. If a player played for multiple teams during the season, he will have a player card for EACH team he was with during this season. You’ll be able to tell which card is which if the same player’s cards are side-by-side simply by looking at the top line. It tells you for which team the ratings on the card are computed. Also, the Junior Circuit year and team name is in red. The Senior Circuit year and team name is in blue.

Just below the year / team name line, you’ll see personal information about the player. Most of the information is just to add to your interest in that player. However, NPNG+ is based on the righty-lefty match-ups between pitcher and batter. You will probably refer to the Bat / Throw area regularly. NPNG+ ratings are based on which way the batter bats and with which hand the pitcher throws. If the batter has a “B” (for being a switch hitter -- batting “Both”), you’ll know if there is a left-handed pitcher on the mound, the batter will be batting from the right side -- and vice versa.

Following the player’s name will be a listing of his actual stats for the season -- based on the year and team name listed on the top line. The info on this line is different depending on whether the player is a pitcher or plays any of the other positions. Pitchers stats include: (GS) games started; (IP) innings pitched; (W) wins; (L) losses; (S) saves; (K) strikeouts (WHIP) walks and hits allowed by the pitcher per inning and (ERA) earned run average. The other players have the following stats: (AB) at bats; (HR) home runs; (SB) stolen bases; (OBP) on base percentage; (SLG) slugging average and (BA) batting average.

After the player’s stats, there will be one or two lines of fielding ratings. The fielding ratings are preceded by the base running ability of the player. All players’ first line of fielding will begin with a (G), (N) or (P). These ratings stand for: (G)ood, (N)ormal or (P)oor.  This rating is the player’s ability to score while on base. Several plays on the boards have a variation of the play based on the base runner’s ability.

The next section of the player’s card has a heavy black line across the top and bottom. If the player is a pitcher, you will see information between the lines. Otherwise, this section will be blank (except for a player with Special Base Running instructions). This area is the Pitcher’s rating section. NPNG+ assigns three pitching grades, three strikeout ratings, three control ratings and three PHR ratings to each pitcher. YOU NEVER USE ALL THREE. NPNG+ has some optional play features and this is one of them. If you wish to use NPNG+ to its fullest, use the pitching ratings to the right of the "vs R:" on Spahn's card when he faces right-handed batters.  Also use the "vs L:" when Spahn faces left-handed batters.

The optional play feature allows you to choose not to use the lefty - righty features of NPNG+.  If you want to play NPNG+ without worrying about which way the batter is batting, go to the reports on the web site labeled "Pitcher Combined Ratings and Stamina Ratings".  Find your pitchers in the report and use the combined ratings for ALL batters.

Returning to Warren Spahn's card above, against right-handed batters, his grade is 24.  His control rating is Z3.  His strikeout rating is K2.  His PHR-R rating (based on home runs given up to right-handed batters) is PHR-R 2.  These ratings come into play from time-to-time on the NPNG+ Play Boards.

One more time, back to Spahn's card, between the heavy black lines and to the far right, notice he also has ratings for Wild pitch, Hit by pitch and Balks.  That's what the WP1, HP and Bk0 are for.  These also show up on the Play Boards at times.

NOTE:  Catchers will have a "PB" rating in the same box to the right where pitchers' WP, HP and Bk ratings are.  The PB rating is based on the number of passed balls a catcher committed in the season.

The SSTAM and RSTAM ratings are stamina ratings intended as a guideline as to how long you should leave a pitcher in the game. SSTAM is used when the pitcher is a starter. RSTAM is used when he is a reliever. Each SSTAM and RSTAM rating is based on the number of batters the pitcher actually faced in each situation on average. You DO NOT have to use this feature. These ratings are actually another optional play feature that NPNG+ offers. Each stat for each pitcher is based on the actual stats produced. If you use each pitcher in a similar way he was actually used, he should produce results very close to what he produced for his real manager. But as an incentive to not overuse pitchers, if you use SSTAM and RSTAM, it will help you use pitchers close to actual usage.  Refer to the "How to Play" book for NPNG+ for more info on this.

The SSTAM and RSTAM ratings for all pitchers are found on the web site in the report labeled "Pitcher Combined Ratings and Stamina Ratings".

Main Section (of a Player Card)

The section referred to as the Main Section of a player’s card is the largest section of the card and contains the dice roll numbers (DRN)11 thru 66 and a play result number (PRN) next to each one. When a batter comes to the plate, this is the section you begin with each and every time. You simply roll the dice and read the red die first, then the white. Go to the Main Section of the batter’s card, find the DRN and get the PRN next to it and then refer to the proper Playing Board base situation. If the PRN is an “H”, you roll the dice again and this time get your PRN from the second column of numbers on the card.  The second column is the Hit Table.

The Hit Table is used to further break down the types of hits and number of stolen bases and caught stealing occurrences. If you look at the Main Section and see NO “H” in the three columns of PRNs, then the Hit Table will be blank -- no second column. If the DRN has an “H” next to it in the first column (Main Section), then a second dice roll is required.  One the second dice roll refer to the second column (the Hit Table).

Let’s look at the Ernie Banks player card above. You’ll notice that if you roll a “22” in the first column (Main Section) for Banks, you find a PRN of “H”.  That means you need to roll one more time and refer to the second column (Hit Table) on his card. Looking at Banks’ Hit Table; if the second dice roll is “54”, use PRN 7 and go to the proper Play Board and look up PRN 7.

VERY IMPORTANT: ANY PRN that comes off from the second column (Hit Table) IS NOT subject to yet another re-roll to see if it is a hit or an out. In the example above, if you refer to the Playing Boards with say, a Runner on First, and when checking the PRN 7 result, DO NOT re-roll even though there are "H" and "O" rows on it! Go directly to the “H” row. In other words, the pitcher’s rating DOES NOT affect ANY PRN coming off a batter’s second column (Hit Table).

Last section of the batter’s card

On the last line of all Player cards, every batter will have ratings for bunting/BFH, H&R and Inj.

NPNG+ allows the manager to bunt in ANY base situation. If the bases are empty, the batter will of course be bunting for a hit. If there are statistics on which to base this feature, the bunting/BFH rating will be two numbers separated by a “/”.  The first number is for normal sacrifice bunting (at least one runner on base), the second is for bunting for a hit with the bases empty.  If no season info is available for bunting for a hit, that option will not be available and you'll only see one number after the "Bunt-".  That number will be used for all bunting -- but the option to bunt with no runners on base cannot be attempted for that season.

The next rating in this section is H&R. On Banks’ card his rating is H&R-3. Use this rating with the Hit & Run situation board that matches. In NPNG+, you can hit and run with runners at first, first and second or first and third.

Lastly, there is an injury rating. Banks’ injury rating is Inj-0. The lower the number, the fewer games players will usually be out for injury. 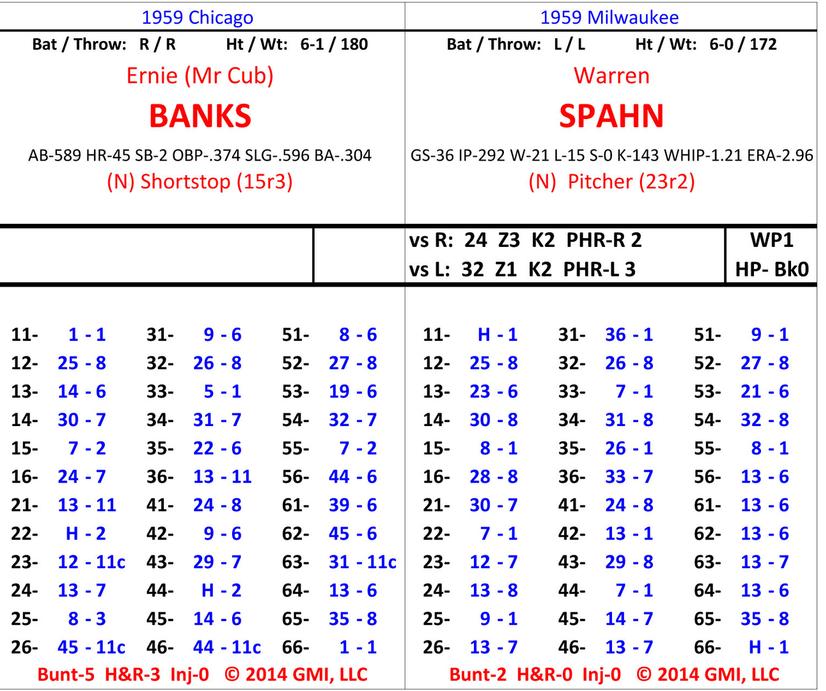