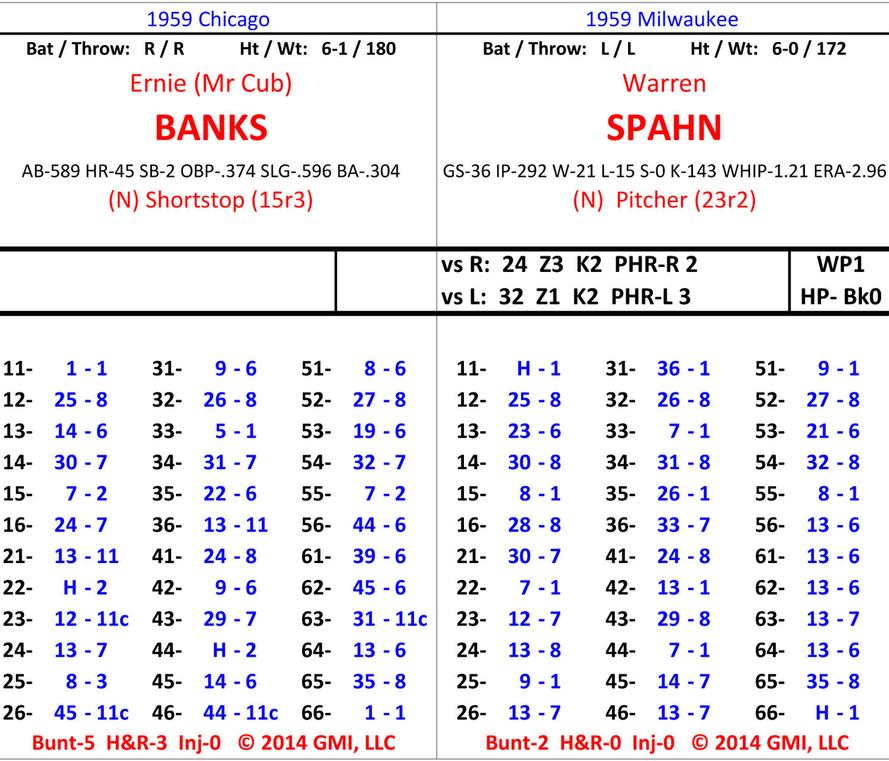 We’re in Milwaukee. Chicago has come in to town to play. The starting pitchers are Moe Drabowsky vs Warren Spahn.  Milwaukee is in first place and looking to get into the Series.

We’re going to start off with the most challenging type of play found in NPNG+.

Tony Taylor will lead things off against Spahn. We roll the dice and we have a 55. We go directly to the Main Section of Taylors’ card and see “55- 8”.  55 is the dice roll number (DRN) and 8 is the play result number (PRN). So we look at the 8 on the Bases Empty boards. We notice that there are two rows on the Bases Empty board on PRN 8. One row is labeled "H" and the other "O" -- hit or out.  Taylor is a right handed batter (RHB). Spahn’s rating against RHBs is 24.  We need to roll the dice one more time to get the final outcome of this play. If we roll a “24” or less (Spahn's rating against RHB), we’ll use the “O” row for this play on the Bases Empty board. Otherwise, we’ll use the “H” row for this play. We roll a “52”. Referring to the “H” row for PRN 8, we see the final play result: “SINGLE to left center”. Taylor starts out the game with a single off Spahn.

We just went through the type of play that is probably the hardest to follow for a new player. You will learn this check between pitcher and batter very quickly. Writing the pitcher's rating vs R and vs L on the scoresheet will save you tons of time. If you can understand the concept in the paragraph above, the rest of NPNG+ will be easy for you. On most plays, you will not have to do the re-roll. But this is critical to the game. It's what allows NPNG+ to get the effectiveness of each player to come out properly. It is a combining of the batter’s ability against the pitcher’s ability to reach the right outcome.  With the pitcher's ratings being a dice roll, there are no additional charts to refer to -- it's all right there.  You compare the dice roll to the rating and you know immediately which row to use.

Let’s move to the second batter

With Taylor on first with a single, we have George Altman batting second -- a left-handed batter. Looking at Altman’s card in the first column -- we roll a 62. Referring to the first column of Altman's card, we see “62- 13”. Using PRN 13 and now making sure we are using a base situation of “Runner on First”, we see that on PRN 13 we have the play “Strikeout; PO-C (K1 - Out at first; runner to second; A-3B PO-1B  * Strikeout; PO-C)”. We first check Spahn’s card to see if he has a “K” number against LHB and if so, what it is. Spahn has a “K2” against lefties. The play goes as a “Strikeout; PO-C”.

NOTE: “K1” pitchers are those that do not get many strikeouts. This can be critical. In this example, if Spahn was rated “K1” against left-handed hitters, notice that this play would not have been a strikeout. It would have been a ground out to third. However, the runner would have moved to second base. Chicago would have had a runner in scoring position with one out.

With Taylor still at first and one out, Lee Walls steps to the plate. Referring to the first column of Lee’s card, we roll a 14. We look on Walls' card and see “14 - 30”. We take the PRN 30 to the “Runner on First” board and see “Fly out; runner holds; PO-LF”. We now have two outs and it looks like Spahn is getting through the first inning in great shape.

If Spahn's PHR rating against right-handed batters was PHR-R 4, the play would have changed to "DOUBLE to center; runner scores".  But Spahn's rating is PHR-R 2.

Dale Long is up with the Bases Empty and two outs.  The dice roll is "32".  Checking the first column of Long's card under dice roll 32 we find a PRN of 26.  Checking the NPNG+ Bases Empty board under PRN 26 we find, "Out at first; A-2B PO-1B".  Milwaukee closes the door on the Chicago first with a ground out second to first.

Complete instructions on playing NPNG+ are found in the booklet "How to Play" under the Menu choice at the top of this web page labeled "NPNG+ Misc".